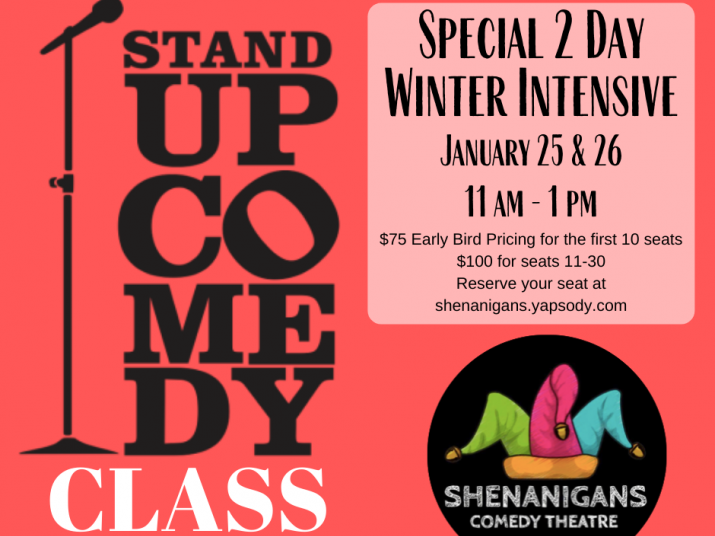 We are taking our 4 week stand-up comedy course and condensing it into a single weekend jam packed full of information to help give you a jump start in comedy.

Jonathan Craig will instruct the class based upon the things he has learned from several years of performing stand-up and will give examples of how each student can build a set of jokes that will allow them to be relatable to the audience and feel comfortable on stage in front of a group of people.

“This is the comedy class that I wish was available to me in Huntsville when I started.”

The goal of this class is to help people use comedy to feel comfortable speaking in front of a group of people and help build a solid foundation for new and beginner comics, by helping them build a strong enough 5 - 10 minute set that they can perform on local showcases and continue to build upon-- giving them a head start on the rest of their comedy peers.

Each class will have an established end goal, but ultimately will be interactive and have a natural flow based on student interaction and interest. Each class will be lead by the instructor using teaching aids such as videos, live demonstrations, and open discussion.

Class 1: Introduction to comedy: Students will be introduced to the instructor, each other, the different types of comedy, and different styles of stand-up comedy. The students will set comedy goals for what they hope to achieve in 6 months of performing comedy. We will also discuss the importance of writing every day. Teach writing exercises that the students can use beyond the class and the importance of having a “comedy buddy” to test material on. Then we will work in groups to create material that can be used on stage.

Class 2: The Stage: In this class we address stage fright and how to overcome it. How to be comfortable on stage. Mic stand placement, where to hold the microphone, and how to connect with the audience. The importance of stage time and how and where to seek opportunities. The business of comedy: Students will learn how to send booking requests. How to treat other performers and club staff with respect. Social media tips to promote their self and upcoming shows. How to approach venues for setting up showcases.Each student gets to run through their full 5 minute set and receive feedback from their peers and guest comics.